From Vertical Measures, here's an infographic about how to build authority for your website through link building, social media marketing and content marketing.

A "viral" campaign is really nothing more than inspiring other people to spread your message. From KISSmetrics, here's an infographic guide to creating a successful viral campaign.

INFOGRAPHIC: The Science of Word of Mouth Marketing

From Column Five Media, here's an infographic that explains what word-of-mouth marketing is, how it works, and how to be successful at it. 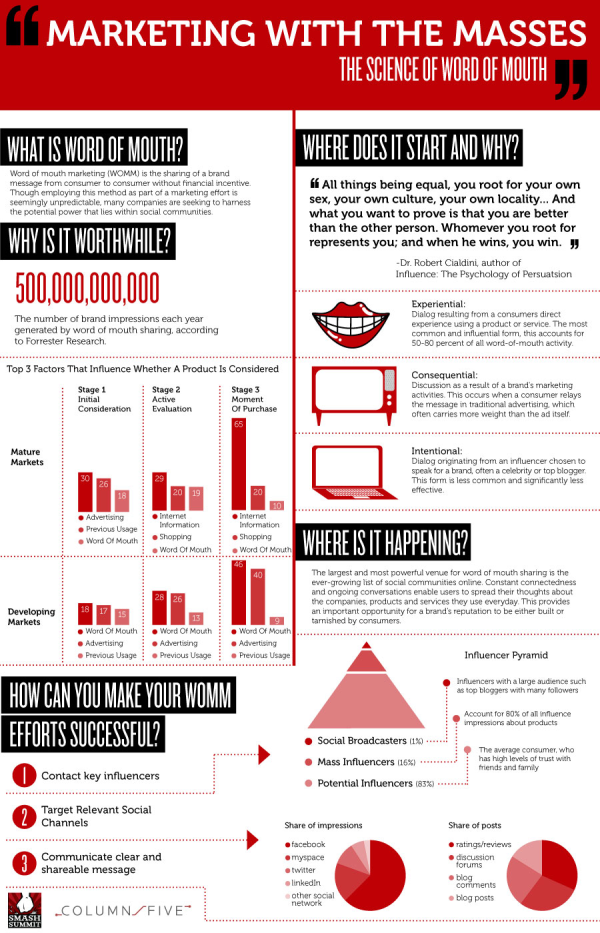 From the Hubspot, here's a humorous video that illustrates the advantages of inbound marketing.

From Capseo, here's an infographic on why word of mouth marketing marketing is increasing in popularity.

Using Social Media to Launch and Promote a Product

From JeffBullas.com, here's a look at how anyone can launch and promote a product, using only social media. These tips are adapted from Guy Kawaski's launch and promotion of his book, Enchantment  The Art of Changing Hearts, Minds and Actions.

Facebook
Kawaski built a fan page specifically for his book. To build a fan base, the incentive to "Like" the page was a free copy of his first book.
Cost: Approximately $2,700

Website and Blog
To avoid the restrictive elements of Facebook, Kawaski built a site for the book as part of his own website. This allowed for more information and images than Facebook.
Cost: Approximately $4,000

Book Reviews by Other Bloggers and A-Listers
Kawaski offered free copies of his book to bloggers chosen from his 20,000+ database. He sent out 1300 copies, gave 150 interviews and got 200 book reviews, which he shared on his site.
Cost: $16,000 (borne by the publisher)

Infographic
An overview of the book was turned into a single image which was embedded on the sites of bloggers and reviewers.
Cost: Approximately $2,000

PowerPoint
A presentation that Kawaski used for key note presentations was published on Slideshare making it easy to share and embed.
Cost: Approximately $3,600

Slideshow on YouTube
Kawaski created a slideshow to thank all the people involved in the book project launch and promotion.
Cost: Approximately $1,000

Brand advocates are people who habitually share information on the products they use, are thought leaders in their social circles, and influence the opinions and purchase decisions of others. They can be effective salespeople for a brand, if you can connect with them. From BzzAgent, here's an infographic to help you better understand brand advocates. 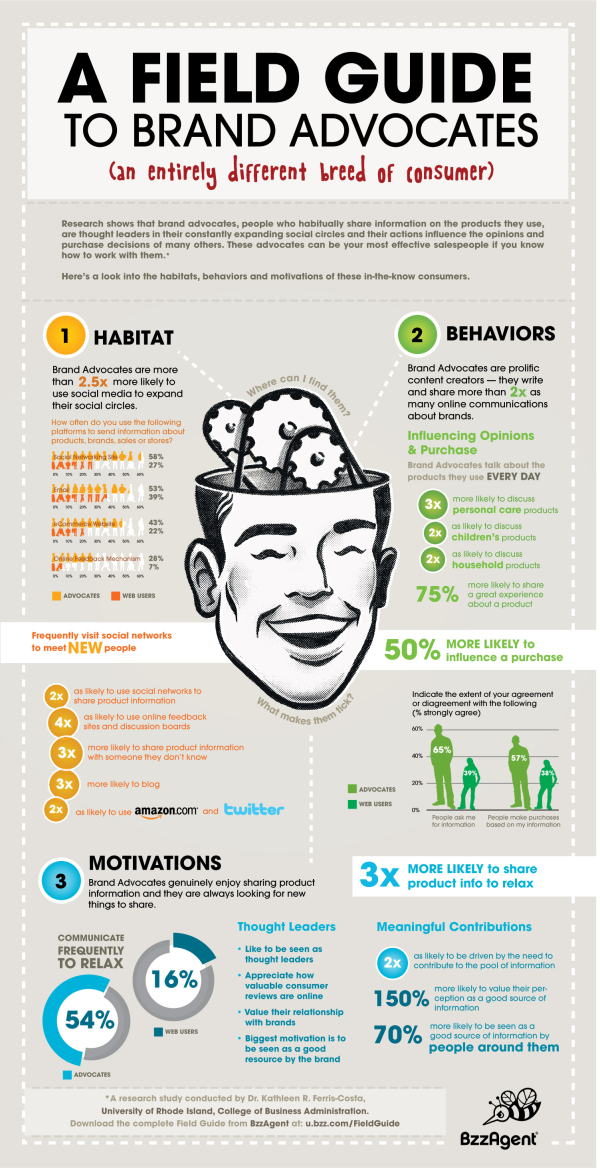 Andy Sernovitz on Damn! I Wish I'd Thought of That, talks about how to get great reviews and make sure your prospective customers see them.

"Ask for testimonials and reviews"
Happy customers are glad to do this. Prompt them to do so with a simple, friendly request. Make sure your site has a way to submit feedback.

"Get permission to share them"
Don't use testimonials in marketing material without getting permission first. Permission can be informal, but should still be written. Include a checkbox with your feedback forms.

"Put it all on your website"
If you have great reviews, you want prospects to see them. Include them on your homepage, sales or product pages, footers and any spot that has visibility..

"Link to compliments already on the web"
Link to positive word of mouth on blogs, Twitter and forums. If it's publicly posted, you don't need prior permission.

"Check it out: Amazon’s funniest reviews"
Most reviews on Amazon are sincere, but occasionally, you can find mock reviews that are sources for some great comedy. Enjoy.

How to Engage with Online Communities

Online communities can provide pre-segmented markets for you to find and engage with potential customers. From Sarah Manley at MarketingProfs, steps for finding your own fans in online communities and converting them to customers.

"Find Your Fans"
Facebook and Twitter are both huge, fragmented communities with short-form content. By contrast, online communities are characterized by longer content, collaboration and deep conversations. The people there are far more engaged with the topic than mere fans. They're more passionate and more likely to become word-of-mouth advocates of things they like.

"Assess the Opportunity"
After you've found the audience you want, have a plan before you wade into the fray. What do you have to offer the community that is unique? Exclusive content? Contests? Make sure you have something that merits the audience's attention.

"Foster the Fanatics"
You can host major branded events in online communities with both short-form and long-form content. Add value to the community via content, thoughtful ads and sponsored contests. If the fanatics find it valuable, they will spread the word about it

How to Keep Customers Happy

Tiny things can make a big difference to your customers. Being treated well often trumps price as the defining piece of a customer's experience. Companies should "sweat the small stuff" whenever they can, so customers don't have to. From Adam Helweh at Social Media Explorer, here are some ways to honor your customers.
View Original Article and Author's Apple Customer Experience

Prev All posts Next